Ralph Coburn, 2 years ago 6 min read 134
It’s been a while since my last blog entry; I plead a crazy summer of 24/7 work, demands of Rovers Magazine, and fatigue. There are lots of classic car stories to catch up one, but this one finally pushed me to post.
Sorry but I couldn’t resist that title. It actually makes sense. Two rear engine cars met yesterday in Rockland, ME, both a trip back to the future.
Yes, that’s a Delorean, the first I’ve every seen in person. If the the Corvair provided a flair, grace, performance and balance that didn’t resonate with GM or the American public, the Delorean provided an in-your-face rebuke to GM and a challenge to American consumers. At least both had the good sense to put the engine where it belongs, in the rear.
The car itself is rather remarkable but even more so is the story behind its presence.Ian Yanagisawa, Houston, TX, found himself laid off from his position as an Environmental Engineer, back in June. He admitted that the layoff angered him but he chose to take the opportunity to do something special. 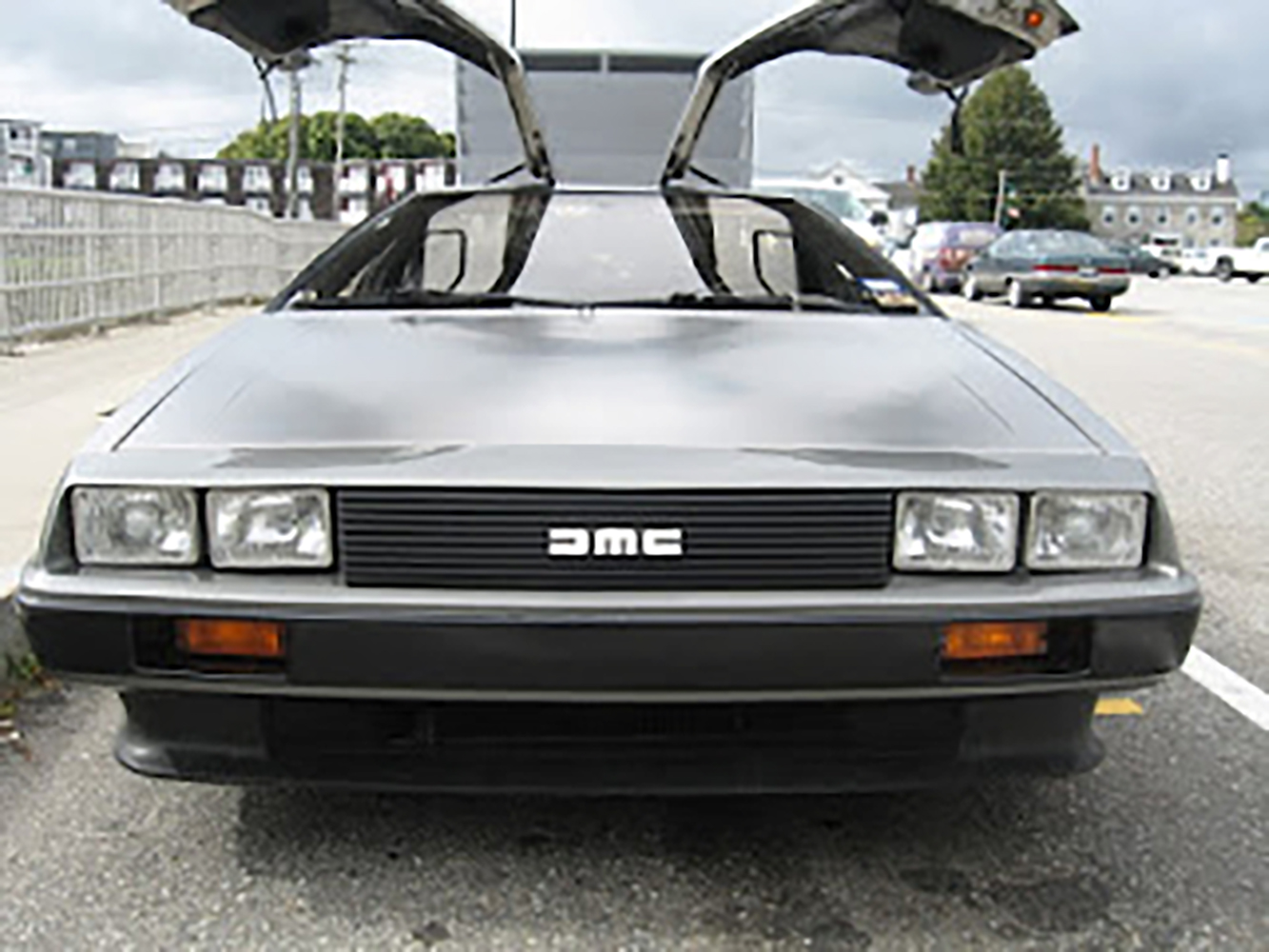 Step ahead to June when Ian found himself with lots of time on his hands and an eagerness to work off his frustration. The answer was the classic Road Trip.

Although you rarely see Deloreans on the road it’s actually a perfect classic car for the 13,000 miles of driving he’s undertaken this summer and fall. The engine and drivetrain came from the Renault-Volvo-Lancia 2.6 liter V-6 that powered hundreds of thousands of European sedans. Unlike the rear engine Corvair the Delorean is water-cooled but the engine bay doesn’t look cramped. The switchgear and lights came from the volume-built cars of its era. It’s low stance, 5-speed transmission and fine suspension make it an outstanding driver on twisty mountain roads but a perfect highway cruiser, too. 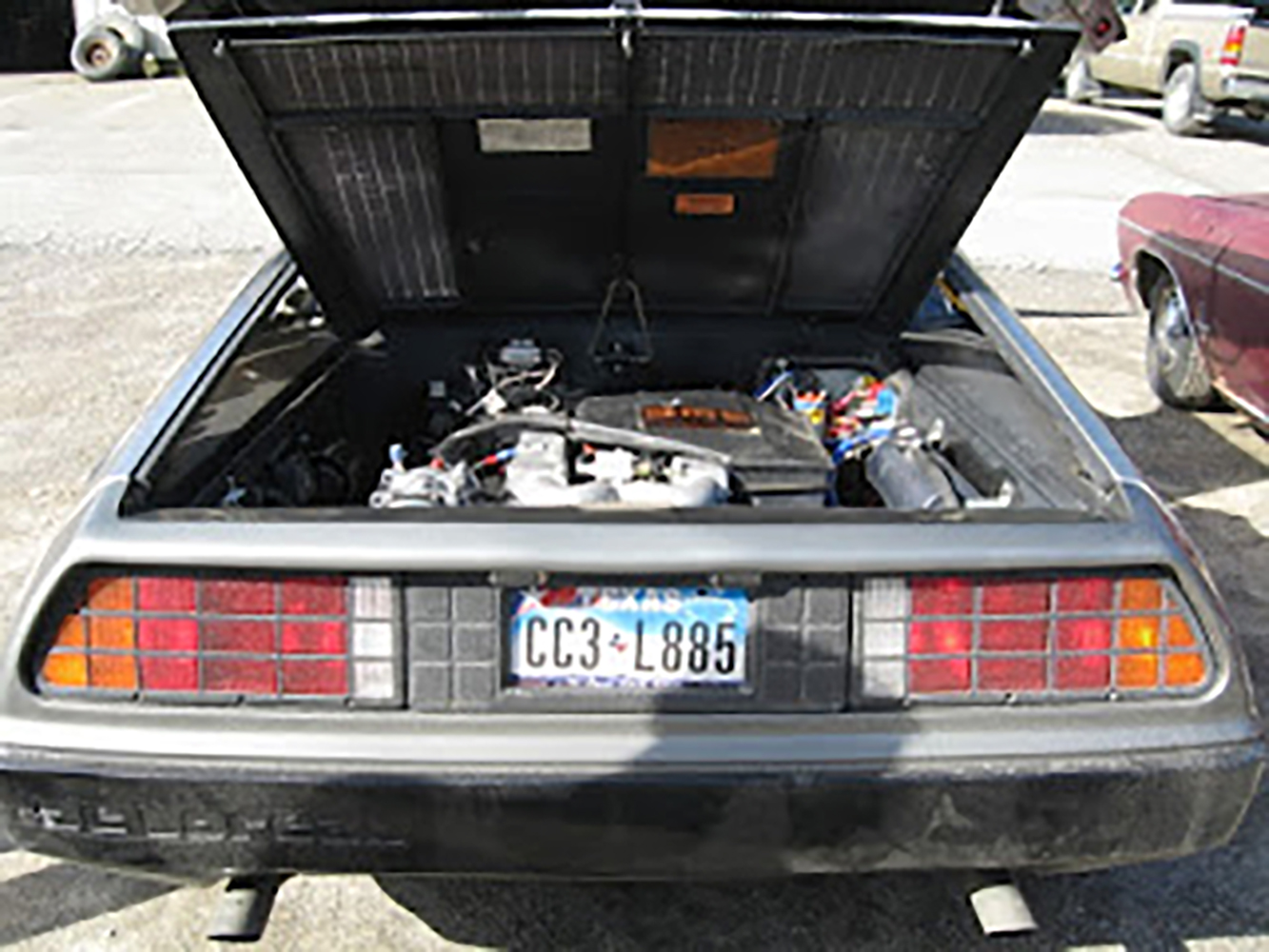 The Delorean also featured a steel frame, onto which mounted a fiberglass shell, covered by the famous stainless steel panels that became the hallmark of the car. You have to be a fan of the wedge shape of that era but it certainly has stood the test of time better than my TR -7. 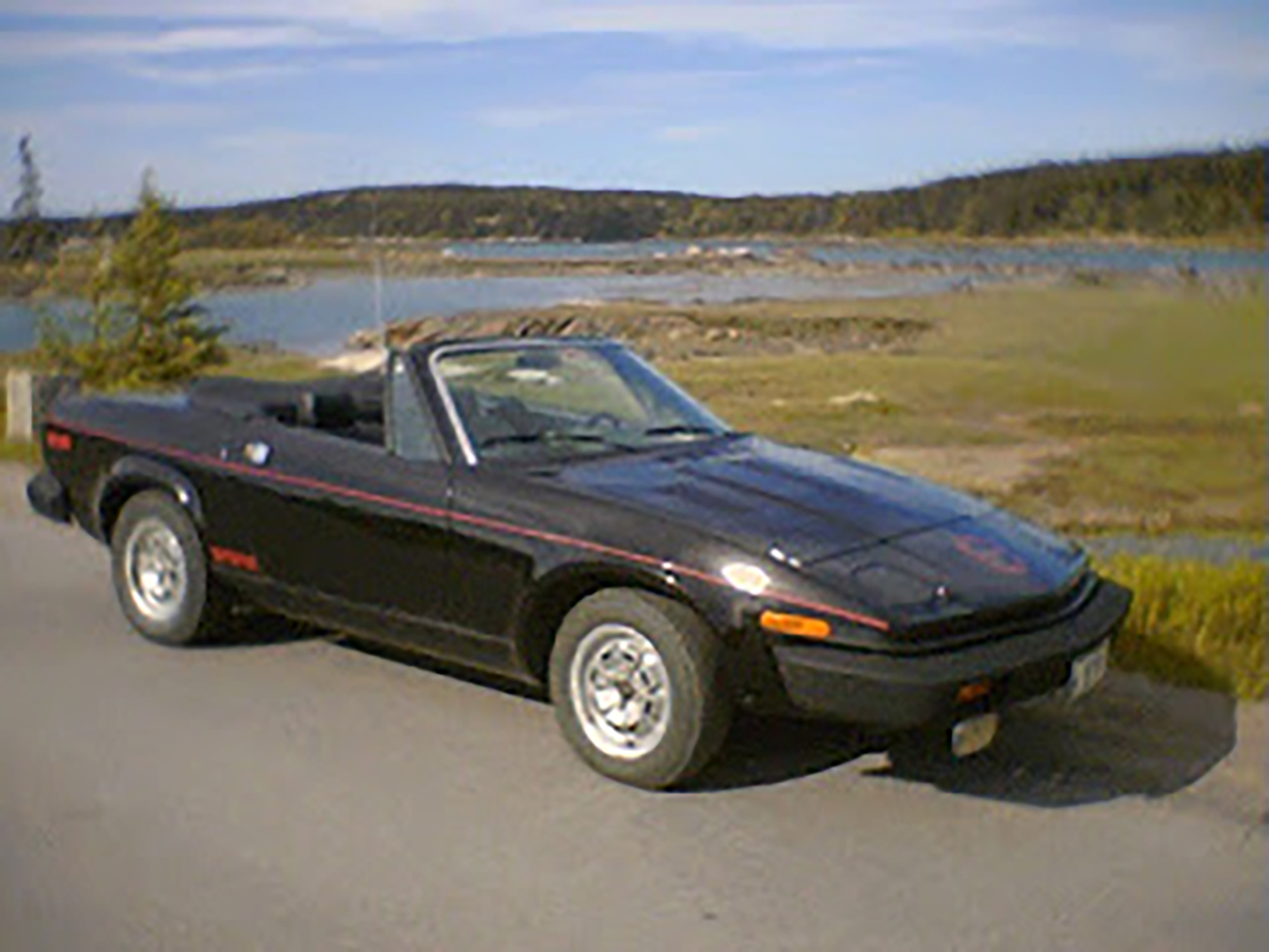 L
an did swap out the fuel injection system for a more contemporary one and went through the hydraulics and electrics to make certain they would prove reliable for the journey – and they have. He replaced the steering rack, installed LED lights and halogen headlights. As he lived in Texas he got the air conditioning system working with new refrigerant. And, of course, since it’s a Delorean, he had to install a “flux capacitor.”
His one failure on the road occurred in California when a front suspension member [designed by Lotus] shook a bushing loose. That required a replacement but the car made it to a Delorean specialist in time for the repair. Oh, and a spark plug wire came loose, causing a misfire. That’s been it so far!
Which highlights another feature of making the trip in a classic car. The primacy of internet-based communications assures that parts, assistance, information and service are instantly available. For example, when ex-pat Stephen Wynne found a private investor, he bought the parts stock of the former DMC and opened a new firm. By placing service centers in strategic locales [Texas, California, Illinois and Europe], by offering online chat assistance, by placing manuals and service bulletins online – no enthusiast should fear for his or her car. Remember a lot of classic cars were really well engineered – they could run for a long time when maintained as automobiles, not appliances. Ian confessed that when he first took over the car and looked at the engine oil, he wondered aloud if it had ever been changed.
In Rovers Magazine I recently ran an article on a new enthusiast, Bobby Sanderlin, who drove his newly-purchase 1971 Land Rover 109″ with his family from Maine to North Carolina. He ran into a problem in Connecticut and called the previous owner for help. The P.O. posted a request on the Rovers North Forum for assistance. A phone call goes out immediately to a Connecticut enthusiast who happens to be out of state when he receives the call. He immediately called a knowledgeable mechanic back home, who got in touch with the Sanderlins, then met them and fixed the car – all within a few hours of the breakdown.

Ian has found similar resources available to him in keeping his Delorean running smoothly – it’s now covered 13,000 miles on this trek. He’s traveled from Texas through California to Washington state, then through the national parks of the northwest all the way to Chicago.

He would up in New England at the offices of Hemmings, which interviewed him and featured his blog in Daniel Strohl’s fine article. Once I read he was heading “Down East” I contacted Ian and we agreed to meet in Rockland, ME yesterday.

I enjoyed hearing his story as well as the company of his friend, Lisa Schreiner, who sounds like someone who has lived in Houston all her life. While it was Lisa’s first trip to New England (“I’m loving it!”) Ian lived briefly in Westport, CT, as as child and looked forward to his visit to his hometown.

Ian noted that “I’m interested in how others are faring in today’s world. My layoff left a bitter taste in my mouth, but I wanted to know about the prevailing attitudes of others. My brother thought I was nuts to make this trip but the people I’ve met have been very friendly.” Obviously, some of that is because of car, but unless they’re the “concours – obsessive” type, it’s really because classic car drivers really care about each other as well as the cars.

Ian also hoped to find a place where he might swap out his defective speedometer cable drive [mounted on the front left hub] and find a shop that could successfully balance the four tires. On Monday morning, I called Copeland’s Garage in Warren, ME, a genuine repair shop staffed by genuine auto mechanics who are genuine auto enthusiasts. Once they remembered just what a Delorean was, they found time to help Ian out and within an hour, installed the new drive [sent up from Delorean Texas] and properly balanced the tires. Despite finding a flat spot in one rear tire, Ian told me in a phone conversation that the previous vibration had disappeared and the speedometer worked perfectly. The entire staff was delighted to see the car in person, too.

The car did rivet attention. Ian had met me at the Maine State Ferry Terminal in Rockland, and when I saw the Delorean in the parking lot, I found myself followed by island friends and a ferry crew member. He remained so transfixed that he bolted suddenly when he realized he might miss the ferry’s return trip! 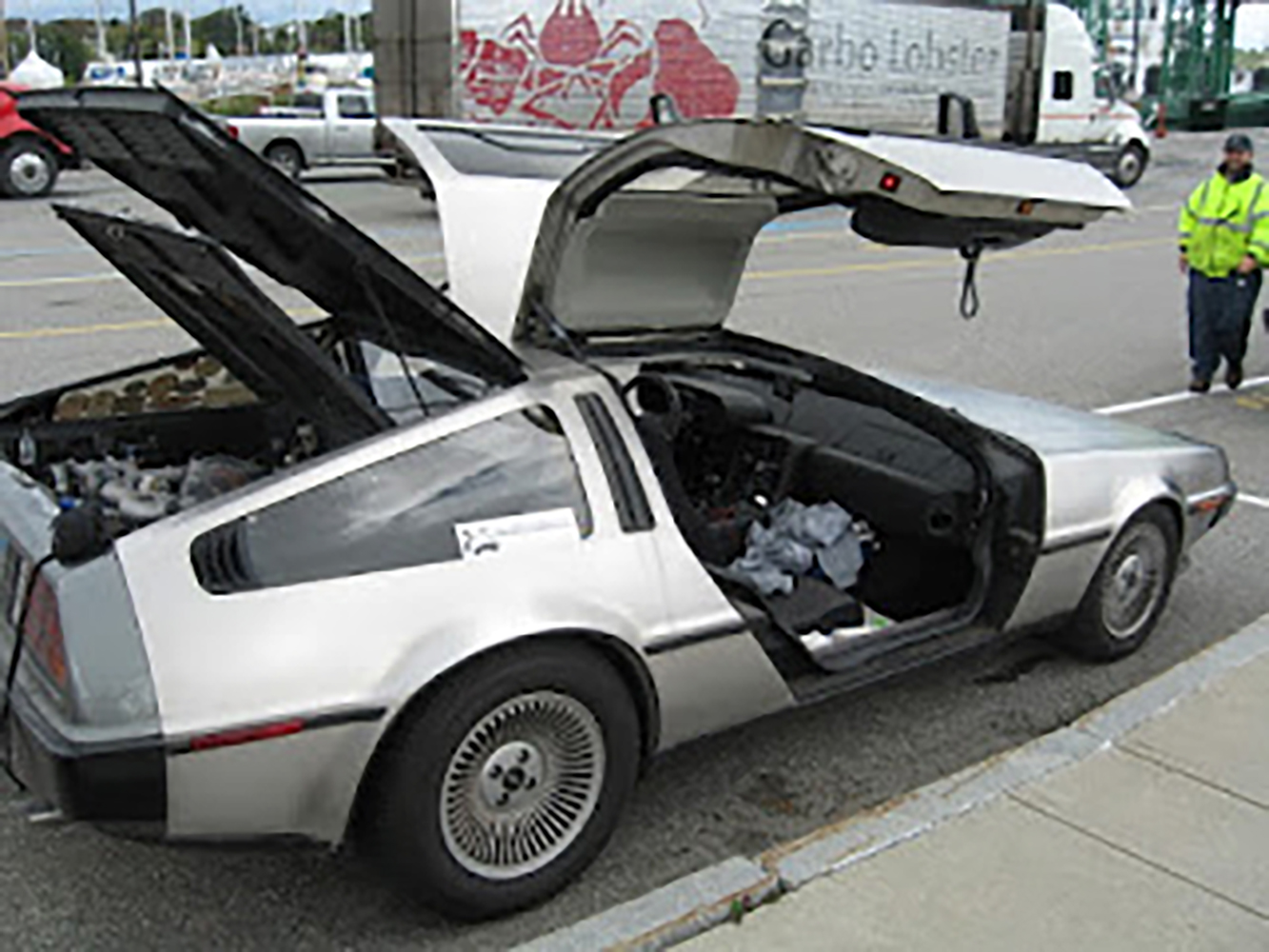 Ian plans to enjoy New England’s foliage season and then wend his way south and reach Texas in time for Thanksgiving. He’s doing what every classic car enthusiast wishes to do – and long before it has to appear on a bucket list.
CAR FEATURES

They Don't All Have to Be Gems