Last week I completed a 715 mile round-trip from Maine to southwestern Connecticut in a 46-year old car notoriously labeled as “Unsafe at Any Speed.”

Yes, it’s the little maroon one buried in the snow in this photo.
The decision to drive the Corvair on a work/vacation trip was not made lightly. I’d completed the trip in years past in my ’66 Land Rover II-A and my ’80 Triumph TR-7 Spider. Driving that same seven hours in the Land Rover had left my ears ringing, my body vibrating and my wallet lighter due to its 18 mpg.

The same distance the following year in the TR-7 made for 25 mpg, less vibration, less assurance [it is a TR-7 after all] and a feeling that I’d sat in a space capsule for 6 hours. It also left me with a December dilemma at a Portland, ME motel one morning – how to get the door locks thawed out? The only successful method was to heat the key with the room’s hair dryer so hot that it popped the circuit breaker in the dryer, then to run down two flights of stairs to insert the key into the lock before it cooled down. The second time was a charm.

So this year I felt the Corvair should do the honors. Work schedules meant that I could not allow myself an extra day [in case of breakdowns]; I would absolutely, positively have to get there on time on Saturday. My hesitation was based on the car’s annoying habit of these past two years of wanting to die off on the side of the road when underway for an hour or more. No mechanic or Corvair expert had been able to figure out the source of this problem.

I booked the Corvair into the island’s garage for the mechanic to check under the car. All the suspension pieces, steering components and wheel bearings seemed tight. I did the usual tune-up of points, condenser, rotor, distributor cap and spark plugs, and checked the timing. An oil/filter change had been done in October. I ordered a spare fan belt and fuel pump from Clark’s and bought a used oil cooler from Maine’s specialty shop, Maplewood Motors, in Cape Neddick. I packed tools, charged the cellphone and said a prayer.

On Friday I boarded the ferry for the 90 minute ride to the mainland and then started on my way south. I made it to Portland late that afternoon, booked myself into an inexpensive motel and then joined a group of Land Rover friends as the Sebago Brewpub in nearby Scarborough.

Saturday morning I packed up again and headed out on the Maine Turnpike, to I-495 in Massachusetts and then onto the Mass Pike towards Connecticut. After stopping for fuel and water [for me, not the car], I started the car and noticed it did not want to accelerate out of the rest area. Just as it had done in the past it began to bog down instead of going faster. As I approached the turnpike entrance I wondered about proceeding ahead at all; you could not turn around and go back on the highway. Instead I plowed ahead and suddenly the car seemed to run on all 6 cylinders and both carburetors. This would happen again at a rest stop in Connecticut but other than that, the car ran flawlessly. Oh, and I got 28 mpg at 60-75 mph.

The car received a few odd stares and one memorable moment. On I-91 between Hartford and New Haven I drove in the center lane when I noticed a Mazda sedan, driven by a young guy, close to my rear bumper. I pulled over into the right lane and he followed me. When I looked in my rear view mirror I saw the passenger with a camera and noticed a flash. The car pulled up alongside me as they continued to take photos of the car from a few angles. Less surprising but equally pleasurable was a time when a new Corvette, with a man and a woman aboard, passed me as the the driver gave the Monza a “thumbs up.”

Seat technology, particularly for “compact cars,” had not advanced far in the 1960’s. Add to this the reality that my driver’s seat consisted of some crushed foam and a sheepskin seat cover and you wind up with an uncomfortable perch for a 6 hour drive. Also, as is often the case with rear engine cars the pedals sit a bit skewed towards the right; you feel as though your right leg is stretched out rather far to hold the accelerator towards the floor. This really became an issue on the trip home – more about that later.

While in Cos Cob my hosts noted they had seen a Corvair for sale and we visited it, right near Greenwich’s public beach. A ’68 convertible it looked good from a distance but showed some minor rust bubbles and mismatched paint up close. Nonetheless, it was still fun to see. 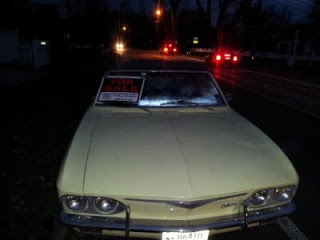 The late model convertible always looked terrific and in this light color, especially entertaining. To my dismay it had the s-l-o-w Powerglide 2-speed transmission and an aftermarket Edelbrock 4-barrel carb [instead of the 4-carb 140 hp setup implied by the air cleaner].

Still the two Corvairs looked pretty good together – they were clearly an unusual sight in this upscale village of Greenwich. 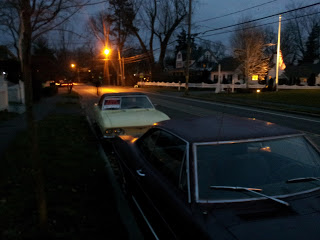 My hostess told me of her cleaning woman’s reaction to seeing the car in their driveway. The young woman, a recent immigrant from Poland, stared out the window to ask “whose car is that?” When she was told it was mine [we had met last year] she asked “he really drove it here?” “Yes,’ my hostess replied, “from Maine.” This astounded the woman, “he drove all the way from Maine? In that?” On the many winding residential streets of Cos Cob the Corvair really strutted its stuff.

The drive home to Maine really demonstrated the Corvair’s capabilities. On the Friday I chose to drive home a powerful storm hit all of New England: heavy constant rain with winds from 40 – 55 mph. Rear-engine cars can tend to yaw in high crosswinds like this and, of course, any required repair in the pouring rain would be most un-fun.

As I drove northeast on the highways I came to realize the weather would not improve throughout the entire drive, that any truck passing the Corvair would engulf it sheets of rain and mist. Visibility would become a problem; as the car leaked a bit around the windshield, so, too would defrosting the windows.

I also realized that I had never driven this car in a significant, long-lived storm. I had no idea if the windshield wiper motor would run for 6 hours or whether the heater motor would function for that length of time. I found I had to open the vent window to assist in airflow the clear the left edge of the windshield. I stopped for fuel in Charlton, MA, along the Mass Pike, and then made it to New Hampshire and finally, Maine. The car, however, never faulted in speed or handling. While I could certainly feel the gusts of wind slam against the car, their shoves were handled easily by the excellent suspension. Everything worked the entire trip.

As I approached Portland I realized the winds had only strengthened and that I should find out if the Rockland-Vinalhaven ferry would even run that late afternoon. A quick phone call indicated “no” so I stopped in Portland for a break. Stepping out of the Corvair the wind shot rain onto my face with such force that the water drops hurt when they landed on me.

I continued on to Rockland and booked a motel room for the night. My right leg now felt like I had stretched a ligament or tendon around my right knee. I could not bend it very comfortably, whether seated or lying in bed. That’s the aftereffect of the driver’s seat – it should be reupholstered one day.

I know that many classic car owners avoid driving their cars in inclement weather – at times, myself included. This work/vacation trip showed me that the Corvair could be used as a daily driver in any weather. I still don’t know the cause of the “bogging” [vapor lock?] after long drives but I now feel much more comfortable about jumping in the car and relying on it.

Importance of sports in your life.